I don’t recall my first experience playing video games, but I do remember a mixed bag of encounters with games from at least the age of three. As an ’80s baby, I didn’t get to spend a lot of time in video arcades. By the time I was old enough to really, cognitively play a video game, arcades were dying, although you could find the occasional arcade cabinet in the movie theater or other random places.

One of those random places was a local Mexican restaurant near my house, called Tijuana Junction. As a three-to-four-year-old kid, I had some difficulty pronouncing that, so I just called it “The Train,” because of the toy train that would go around the restaurant on the tracks that were in place near the ceiling. My parents also took to calling it that because of me. The Train is no longer in existence, unfortunately. And while I fondly remember eating their yummy burritos as a child, what I miss most is the Teenage Mutant Ninja Turtles arcade cabinet. 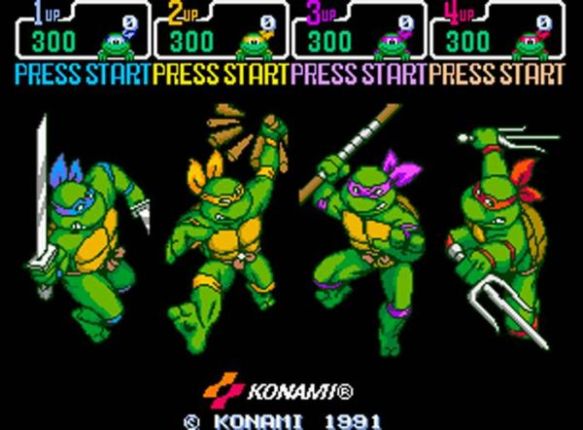 It should come as no surprise, then, that like the Ninja Turtles, pizza was (and is to this day) my favorite food. In fact, I remember one snack time at day care, we were given mozzarella string cheese. At the age of three, I’d never really seen string cheese before, so I was a bit cautious, and therefore reluctant to try it. But I remember, in explicit detail, how the daycare lady coerced me into eating that string cheese. She told me, “It’s the same cheese the Ninja Turtles eat on their pizza.” That string cheese didn’t last long after that.

I remember days when I’d stay with my grandparents and my Grandmother would help me dress up like a Ninja Turtle. She took a piece of fabric from the laundry closet and she cut out eye holes. She helped me put it on my head in the same way the Turtles wore their bandannas. She then gave me her laundry stick — which she used to gather wet laundry from the bottom of the washing machine before putting it in the dryer — to use as a sword. It wasn’t a stick from a tree, but rather a smooth, cut piece of wood. In retrospect, I probably wasn’t a very convincing Ninja Turtle, just to look at me, but in my mind, I was Leonardo.

I tell you all of this so that you’ll know there was a time in my life when the Teenage Mutant Ninja Turtles were my life. So you can imagine how I must have felt when, sitting at the table with my parents at The Train, I heard the familiar “Heroes in a half-shell, turtle power!” coming from around the corner. My face must have looked something like Kevin McCallister’s in Home Alone when he put his hands on his cheeks and gasped in horror, only I was full of excitement. I hopped out of my seat and looked to where I heard this timeless piece of brilliant music coming from. I rounded the corner and peered into the back of the restaurant, in a small, dark alcove, where there was a lone arcade cabinet, along with a couple of random pinball machines.

Our food had not arrived yet, so my mom allowed me to explore while she followed me. To my absolute delight, I discovered the aforementioned Teenage Mutant Ninja Turtles arcade cabinet. It required two quarters, so I looked back at my mom with an urgently inquisitive look of “PLEEEAAASSSEEE?!” She obliged and gave me the two quarters needed to begin pummeling members of Shredder’s Foot Clan. As a four-year-old, going on five, I was just barely tall enough to see the screen and comfortably control the joystick and buttons. I selected my favorite Turtle, the two-katana-wielding Leonardo. When I pressed the button to confirm my selection, I heard the greatest expression of excitement known to man — COWABUNGA!

And then came that infectious, poppy, digitized chiptune music. My career in crime fighting had officially begun. I wasn’t very good at the game, so as you can imagine, my two quarters didn’t last long. My mom was kind enough to allow me two more quarters and told me I could play one more time before we had to go back to our table. I progressed just a little further than before, but still didn’t make it past the first stage. That didn’t dampen my spirits, though, because for the first time ever, I felt like I was really one of the Turtles — fighting Shredder, Krang and the Foot Clan, in an attempt to foil their evil plans for world domination.

From that point on, every time we’d go to The Train, which was usually on Friday nights, I’d beg my parents to let me go play the TMNT arcade game, both before and after our supper. Eventually we moved to a different part of town and we didn’t go to The Train as often. On one of our rare visits back, a few years later, I hurried back to that dark alcove in the back of the restaurant, only to discover that my beloved Teenage Mutant Ninja Turtles arcade cabinet was no longer there. I don’t recall if the pinball machines were still there, because I really didn’t care. But in my memory, I just remember seeing an empty darkness. I was heartbroken. Didn’t these people (the restaurant owners) know what that arcade cabinet meant to me? Didn’t they realize that the Ninja Turtles were true American heroes? How could they do this? This must have been some kind of mistake! Apparently it wasn’t. But for that seven-year-old little boy, all was not right in the world. My heart had been ripped out.

This piece was inspired by a nostalgic review for The Simpsons Arcade, written by my buddy at GamerNode, Senior Editor, Jason Fanelli.

3 thoughts on “Turtles Back in Time”