Getting Up to Speed

It’s been nine years since our last voyage to PNF-404, and nearly 12 since our inaugural visit.

To put that in perspective, I am now 25 years old. I graduated from college two-and-a-half years ago. When the first Pikmin game came out, I was 13 years old and in the eighth grade. Pikmin 2 was released in 2004, just as I was beginning my junior year of high school.

In the time since, nearly a whole console generation has come and gone. The Nintendo Wii, a platform centered around the use of a precision-based controller, and perfectly suited for a series like Pikmin, never saw an original title in the series.

Sure, Nintendo reworked the first two games to make use of the Wiimote. And I suppose that was enough to hold us over, at least for a while. But after a number of excruciating delays, we finally have Shigeru Miyamoto’s latest labor of love, Pikmin 3.

I’ve written this review to be as spoiler-free as possible, so continue onward, fearless explorers! Move with haste, and without trepidation!

Who Are You People?!

The first thing that stands out upon starting up Pikmin 3 is that we don’t control the Hocotatians (from the planet Hocotate) we’ve grown to love (or despise). Instead, we’re introduced to a new group of adventurers from the planet Koppai. They are Alph, the engineer — Brittany, the botanist — and Charlie, the captain.

Koppai — a planet on the verge of collapse, and whose inhabitants have depleted every last edible resource — has sent its finest astronauts into the cosmos in an effort to search for enough food to keep its citizens alive, and for seeds to cultivate new food on Koppai.

These endeavors have proved fruitless to this point, as all but one ship have returned — none bearing any type of sustenance. It’s now up to the last crew still in space — the team aboard the S.S. Drake — to return with nourishment.

Just like with Olimar, and then Olimar again with Louie in Pikmin 2, you’ll start Pikmin 3 having crash landed on PNF-404. What is it about this planet and crash landings? At one point, Alph even states that it felt as if something was pulling down on the spacecraft. I won’t divulge any more than that, but once you’ve completed the game, you may find it tempting to look up fan theories on YouTube.

Miyamoto has mentioned the existence of a “secret code” within Pikmin 3, which seems to have already been revealed by a handful of dedicated gamers online. But before you can even really begin to ponder on any theories pertaining to the story, you need to actually play the game. So let’s talk about controls.

If you’re unfamiliar with the franchise, the Pikmin games are basically RTSes (real time strategy games) for people who don’t like RTSes. In other words, they aren’t overly complicated. You control a character who tells the little Pikmin what to do. You order them around, completing tasks, battling enemies and collecting fruit and items. Different Pikmin have different abilities, skills and weaknesses, and you’ll encounter obstacles along the way the require the use of each and every one. These games do require a tactical approach, so you can’t just run around without taking each situation into careful consideration. They’re challenging games, but not overwhelming.

Because the Wii U is compatible with Wiimotes and Nunchuks, Pikmin 3 allows for the exact same control scheme as the ports of Pikmin 1 and 2 for Wii. While this certainly gives the player maximum precision, I spent most of my time using the Wii U GamePad.

This is mostly due to the fact the in-game map is so easy to navigate with the GamePad’s touchscreen. You simply use use your finger to scroll around map, and the game pauses while you scan over the environment. Sure, if you’re using the Wiimote and Nunchuk, you can always just place the GamePad in its cradle in front of you and let it charge, but then you have to empty your hands and pick it up when you want to survey the area. For this reason, I feel it’s just easier to continue using the GamePad. Plus, I ended up using the map a lot, so that would’ve gotten old, fast.

In fact, after completing Pikmin 3, I went back and began playing the original Pikmin on GameCube. It took me all of 60 seconds to realize how much I’d come to rely on the map’s placement on the GamePad. It was just so much more functional. There’s also a cool feature where you view everything from your character’s perspective, and you hold the GamePad like a camera. You can move it around like you would a real camera and take the shot you want.

The only real complaint I have with using the GamePad is that it can sometimes make it difficult to lock on to flying targets. It’s not a game-breaking hiccup by any means, but just be aware you’ll need to be a bit more tenacious in your efforts to take down flying enemies. 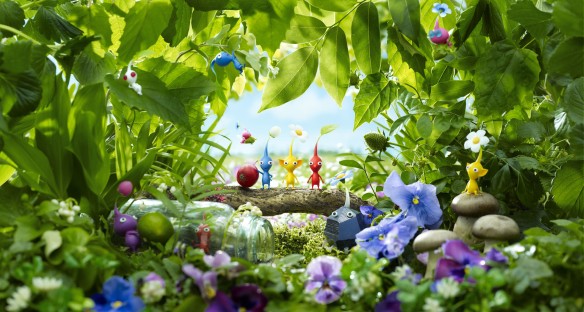 Speaking of things that fly, one of the two new Pikmin introduced in Pikmin 3 is the Winged Pikmin — a pink, fairy-looking Pikmin, who makes up for its lack of attacking prowess with expanded range. With this friendly new Pikmin, certain types of gates can be lifted rather than destroyed. It can also fly over water and take routes other Pikmin can’t.

Also new to the team is the Rock Pikmin, who can really pummel enemies and clobber destructible barriers. It’s not the quickest Pikmin available, as it usually takes a few seconds to recover from its head-first flop into a target, but it definitely packs a punch. This Pikmin looks like a chunk of chiseled graphite.

Red, Yellow and Blue Pikmin, mainstays of the series, all return for this third installment. Purple and White Pikmin, who you’ll remember from Pikmin 2, do not make an appearance in the game’s Story Mode, however, they are available to use in ‘Mission Mode,’ which I’ll talk more about later on.

The Rest of the Story

The Story Mode in Pikmin 3 is the most satisfying of any in the series. You no longer feel the pressure to complete your mission within a set amount of time, because in Pikmin 3, there is no set amount of time. So long as you continue collecting enough fruit to keep you alive, you may soldier on. And that’s a welcome departure from the previous two games, as it really allows you to take your time and explore every nook and cranny of each stage. That’s rewarding, because the level design in Pikmin 3 is much more creative than in games past. It’s dynamic, full of variety and far less flat.

Similar to the way Pikmin 2 allowed for splitting duties between two people, Olimar and Louie, Pikmin 3 lets the workload to be split between all three characters — Alph, Brittany and Charlie. There are certain instances within the game where you definitely need to take advantage of this trio, however, my ineptitude and inability to multitask rarely afforded me the opportunity to take advantage of the third crew member.

However, after watching other people play in YouTube walkthroughs and Let’s Play videos, it seems most folks have no trouble splitting duties. I’ve read a number of reviewers say it took them roughly 10 hours to complete the game, but my personal play time clocked in closer to 14 hours. The way I see it, there’s so much to do and investigate, there’s really no reason to rush through the game. And even when you’ve completed the Story Mode, you really just want to start all over and do it again. This is a game with great replay value. 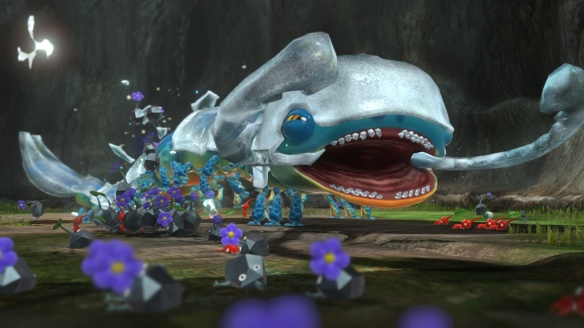 Once you tire of Story Mode, you may want to try your hand at Mission Mode, which actually does pit you against the clock. You can grab as much treasure as possible, taking out the baddies who stand in your way. Or, you can simply choose to fight your way through an area, slaying every enemy you come across. The more the merrier! You can easily spend hours on end trying to one-up your previous score.

But wait! There’s more! If after you beat the Story Mode, and you can longer top your high scores in the treasure and battle rounds, then you should hone your skills facing off against the game’s bosses. Here, you can take on each and every boss you encountered earlier in the game. This can actually help improve your Story Mode playtime if you’re trying to do a speed run.

And if all of that doesn’t whet your appetite, then there’s one final game mode, which allows for splitscreen multiplayer, called ‘Bingo Battle.’ In this, you’re given a bingo card, but instead of just having random numbers in each square, you have various fruits and enemies. Basically, the first to track down, defeat and retrieve the items to complete a row on your bingo card wins. These battles are actually pretty quick and make for great fun with friends.

Pikmin 3 is easily the Wii U’s best looking game, but I have to think it’s only the tip of the iceberg. No, Nintendo’s newest console isn’t a powerhouse, but it certainly isn’t weak. The Pikmin series is one that takes place almost exclusively in natural environments, which are depicted in a stylized form of attempted photorealism. Basically, the world in which Pikmin takes place is a slightly artsy spin on the real world. Our characters, Pikmin and other living things, however, are much more cartoonish in style. And that’s exactly what we’ve come to know, love and expect from Nintendo — nothing that completely attempts to rid itself of fantasy.

The music in Pikmin 3 is as endearing as ever. You’ll certainly hear some familiar tunes from previous games in the series, but there are plenty of new ones, too. Much of it is worthy of tracking down on YouTube and setting to repeat for hours as ambient, background music while you work. Actually, that’s what I’m listening to as I write this. And beyond the music, I always love hearing the characters “speak” in Pikmin games, because they always use some form of cutesy gibberish. Actually, they sound (and look) a lot like Professor E. Gadd from the Luigi’s Mansion series, but that’s a theory for another day.

It’s been a long time coming, but this is the game we’ve waited for. And let me tell you, it was worth the wait. Pikmin 3 is a brilliant game from start to finish, and in a series that can already boast of its high quality, this game shines the brightest. If you own a Wii U, or if you’re looking for a reason to, Pikmin 3 is undoubtedly the best incentive right now. This game will easily eat up hours, just like Koppaite eat up fruit.