If you’re not an obsessive fanboy like I am, then you’ve probably not kept up with all the news surrounding the newest Teenage Mutant Ninja Turtles movie. It’s been the target of a colossal amount of scrutiny for more than four years, largely because of the Hollywood names associated with it.

Michael Bay, best known for directing the recent slew of Transformers movies, has a poor reputation among the geek elite. When his name is mentioned, a collective groan can be heard across the internet, as if millions of voices suddenly cried out in terror. And while this new TMNT movie is not directed by Bay, he is credited as a producer, as his company, Platinum Dunes, is producing the film.

This distrust among fan is compounded by the fact director Jonathan Liebesman does not have a good track record. TMNT is really only his fifth major directing job, and his previous works leading up to this haven’t been well received at all.

The overall critical reception to his previous four films are graded on Rotten Tomatoes. They’re all marked as rotten, with the following scores (out of a possible 100%):

The audience scored each film in a similar fashion, although The Killing Room was the only one to have a lower audience score than critical score. To be fair, I’ve never seen any of Liebesman’s movies. However, they didn’t appeal to me before I saw their scores, but they appeal to me even less after.

I’ve only seen three of Bay’s films, but hardly remember anything about the first two (Pearl Harbor, The Island). The most recent was the first Transformers movie. I didn’t hate it, but I certainly didn’t like it well enough to see any of its sequels.

I don’t know to what extent Bay is involved in the development of the TMNT movie, but I would imagine he has a pretty strong presence in the film’s overall “style.” That is to say, he probably helped select (possibly handpicked) the director, the screenwriter, the actors and even the visual style of the film.

If you’re not a fan of Bay’s “artistic vision,” then the prospects of you liking this film are grim. He has an odd standing as a director — his movies always rake in tons and tons of money, but are always lambasted by critics and movie-goers alike. I mean, obviously someone’s interested in seeing his movies, but you almost never hear anything good about them. I get the feeling that part of that is because it’s just “cool” to hate on Michael Bay, but there’s probably some merit to the criticism, as well.

One retort I’ve heard repeated regarding his movies is, “What do you expect? It’s just a dumb, fun action movie. Get over it!” Okay, I can buy into that a little bit. I think that type of movie serves a purpose, and I’m of the opinion that professional critics are often a little too critical. But a large contingent of movie-goers — the majority who rate Bay’s films, anyway — usually have harsh words for his work.

So I’m not exactly hopeful.

Add that to the fact Bay initially wanted the turtles to be aliens (rather than mutants), the movie was initially just called ‘Ninja Turtles,’ Shredder is played by a white guy (William Fichtner, who is not Japanese), and the questionable decision to cast Megan Fox as April O’Neil, and you can see why many TMNT fans are already calling the movie a failure, months before it’s been seen by anyone.

That said, I’m trying to reserve judgment until after I’ve seen the movie. I keep having to tell myself that, which gets increasingly difficult with each bit of additional information that comes out.

Throughout the past week, a handful of images have emerged which allegedly depict the design of the turtles and Shredder in the upcoming film. We’ve seen what appear to be on-set models, which I imagine are used for reference when filming. You can see them here and here. Below is a closeup of Leonardo. 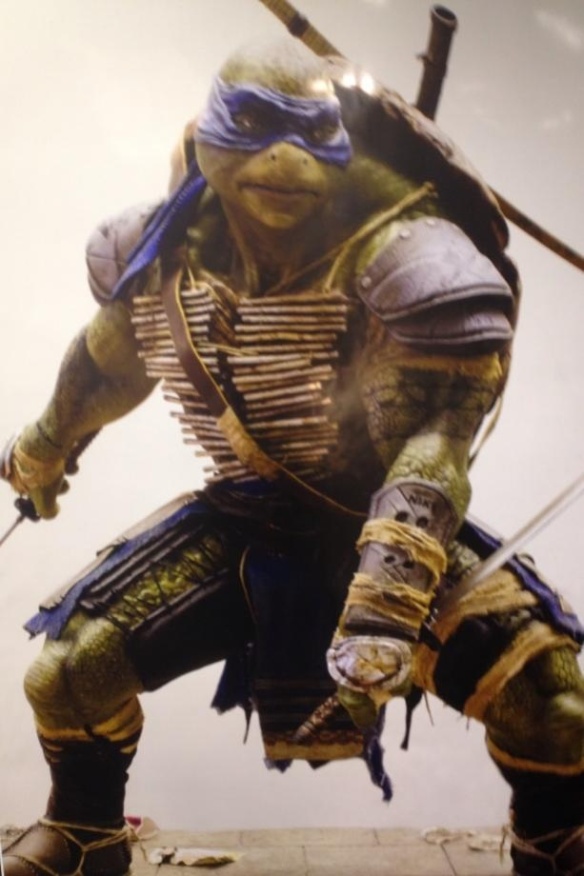 Just a day after the previously mentioned images appeared, a movie poster bearing the movie’s original title emerged, which appears to display the same turtles as before. 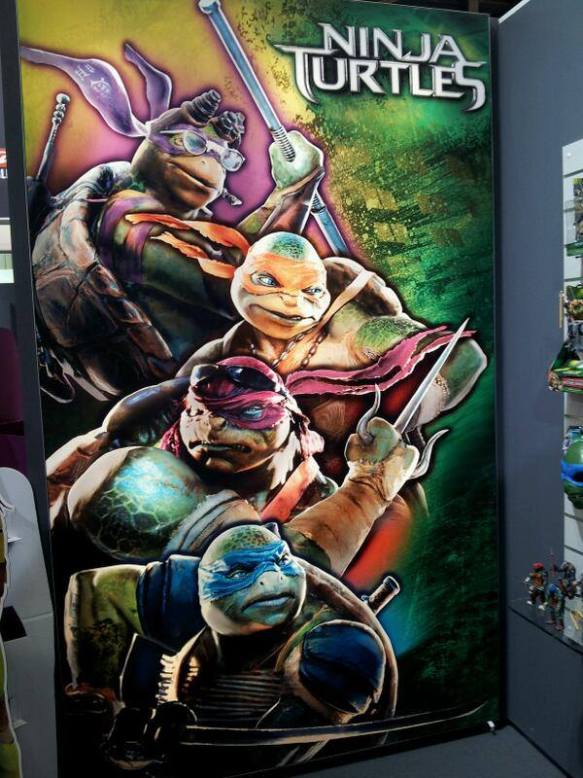 And then, yesterday, one more image made its way to the internet, showing what appear to be action figures for the upcoming movie. For whatever reason, Leonardo is not in this image.

Along with the first set of images, three pieces of concept art depicting the Shredder also leaked.

Of all the images shown, these depicting the Shredder are the only ones that don’t make me cringe. I don’t think this design (which we don’t know is final or even official) is anywhere near perfect, but it’s the one that seems to resemble anything close to what I’ve grown accustomed to through various interpretations in comics and cartoons. He actually looks like a more menacing, buffed-up version of the 1990 TMNT Shredder.

The turtles, however, look awful. I can’t stand the style at all. They have these weird, human lips. And the’re all covered in clothing and jewelry. Why does Michelangelo need multiple necklaces and chains around his neck, football pants, busted shoes, and a sweater tied around his waist? What’s up with Leo’s made-of-sticks chest cover? Does Raphael really need his bandanna to double as a do-rag? And why does Donny need glasses and microscope goggles?

I could go on and on about all the junk the turtles are all wearing, but beyond that, they look like they’re all ‘roided up. They could be NFL linebackers. They just look bad. In fact, I’d say they look like hulkier, uglier versions of the “Next Mutation” turtles, only worse. Now that’s hard to do. 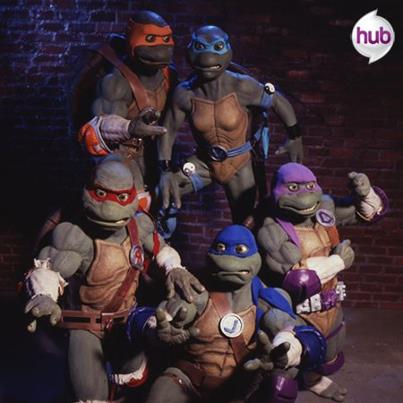 With all that said, and with all the cynicism I’m holding on to, I will be going to see this movie. I have to. As much as I hate the look of it so far, I’d be remiss if I didn’t at least give it a chance. Because I want it to be good. As a fan of the Teenage Mutant Ninja Turtle comics, cartoons, movies, video games and action figures, I want this movie to live up to its namesake.

I just don’t have a lot of faith in it right now. Hopefully I’ll change my tone, and maybe it will grow on me, but right now, I’m not liking the look of things to come. Throughout countless iterations, and through various forms of media, the only real low-point for the franchise was the “Next Mutation” live-action show, in my opinion (yes, I’m giving the anime and “Coming Out of Their Shells” a pass). I just don’t want this movie to join it.